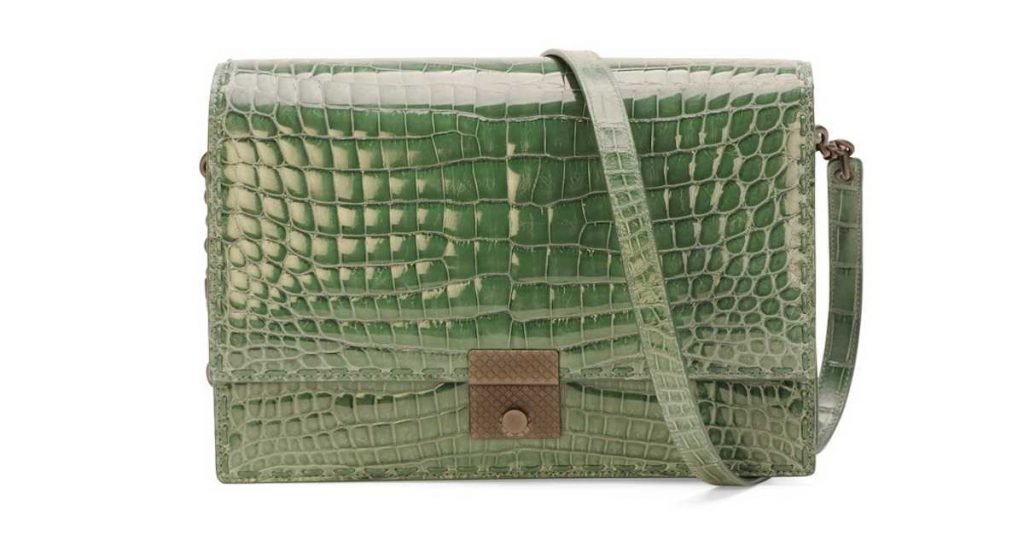 Handbags are one of the most favourite accessories of every woman. You’d probably agree with me that no matter the number of handbags a lady has in her closet, getting an extra few wouldn’t hurt. Perhaps, she might be ready to spare a few dollars to acquire a delectable one but what about thousands of dollars?

This elegant beauty, a creation of Marc Jacobs is made of purple crocodile leather skin and has segmented leather both inside and on the exterior. Compared to the other bags, it’s a steal at this price. Also, if you’re ready to spend thousands on a bag, this bag does make a good pick. It will also go perfectly with a pretty expensive dress. What do you think?

The designs of this bag aren’t really super pricey but if you want a custom-made bag with two of the rarest animal skin, sable and chinchilla, then you’re in luxe territory.

This bag was crafted by Norwegian designer, Hilde Palladino. It features 39 white diamonds hidden inclasps of white gold. Imagine that! The price tag on this totally makes sense.

Louis Vuitton is a very popular name in the fashion industry and this bag only takes it to a higher level. This tribute patchwork bag has a radical look that hardly any high-end designer can produce and this makes it all the more different and worth the attention. Only 20 of these bags have been created from 15 different LV patterns. Getting your hands on one almost one-of-a-kind bag can be worth it.

This is another design by Louis Vuitton that boasts of various lurex jacquard weaved monogram fabrics under all kinds of tassels. It features exotic skins like crocodile, snake and fox. It is also functional having a port for your headphone cables as well.

It is a matter of fact that this designer bag is still among the most expensive bags. This Leiber Precious rose couldn’t have been named anything but precious. This creation has a total of 1,106 diamonds (that’s about 42.56 carats), 1,169 pink sapphires and 800 tourmalines all set in 18-karat white gold. This makes it one of the world’s most prices t accessories.

An outstanding feature of this bag is the palladium hardware. This is a very rare metal, lustrous and silvery-white in colour.

This crocodile Birkin bag is downright exotic with its perfect blue colour. It has also become one of the world’s most famous and designer handbags that women would love to die for. This bag was inspired by French actress Jane Birkin. It is made of crocodile skin with a clasp that consists of 10 carats of white diamonds.

This bag is one of the most expensive LV bags that has managed to get drowned in controversies. It’s definitely not something anyone can flaunt. LV’s Urban Satchel has an unusual style of wrappers and trash attached to it. What has the bag going is the idea behind it, i.e., the urban lifestyle.

This is a stunner bag in dark blue crocodile skin. It also has gold fittings that re encrusted with 18-karat diamonds.

It seems Hermès Birkin bags are competing with the perfection they define themselves with. This fuchsia designer bag appears to sparkles as soon as you lay your eyes on it. It is crafted with 18-karat white gold and diamonds. A bag fit for a queen.

This bag is crafted with 334 diamonds (that’s about 3.56 carats) set in 18-karat white gold. It also has white gold straps. The fact that there are only 13 of these bags leaves us in awe.

This redwork of art is yet another phenomenal creation of Hermès and is among the priciest bags of all time. This bag has been crafted with Porosus crocodile skin, diamond-studded hardware and 18-karat white gold.

This exotic Hermès Himalaya bag is definitely the holy grail of handbags. It is considered to be among the rarest in the world. Constructed from rare “almost albino” crocodile skin, this bag also boasts of 242 diamonds on its 18-karat gold hardware.

The bag has a gradation that bears a strong resemblance to the majestic and gorgeous snow-capped Himalayas.  It is also considered a collector’s item as only one or two of these bags are produced yearly.

Originally designed for A –list celebrities attending the Academy Awards by some selected group of artisans, this bag is adorned with beautiful rare gems of different colours and designs. The gems include natural pink diamonds, blue diamonds and other precious stones. Marks now produce only one Cleopatra bag a year so they are highly coveted.

This bag is unique, and a limited edition bag crafted from scratch by Japanese designer Tanaka. It comprises platinum and 2000 diamonds on its outer shell. It also has a detachable strap that can double up as a necklace and an eight-karat pear-shaped centrepiece that can go for a brooch.

Just three pieces of this work of art were made by Pierre Hardy, creative director of fine jewellery at Hermès. This purse is made of entirely rose gold and is studded with 2,712 diamonds.

This is another bag designed by Pierre Hardy. It boasts of white gold studs that were strategically encrusted with 1,160 pieces of diamonds. This totals 33.94 karats. Just like the Sac Bijou, only three of these were made.

This is a jaw-dropper designed by Hermes in collaboration with Pierre Hardy. This is a stunning detailed handbag that mimics crocodile leather. Want to know the best part? Every ounce of it is made from solid rose gold.

The Hermès Kelly Rose Gold contains a total of 1,160 diamonds. Only 12 of these handbags were made but they come in 3 varieties. Know however that the size is pretty small and the chances of a pair of sunglasses even fitting into it seem slim.

Wow! This is pretty much for a handbag, right? Well, let’ see what features it has.

This heart-shaped piece of art was designed by a world-famous jeweller, Robert Mouawad. Yes, you heard right. It’s surprisingly not from Hermès.

This work took 10 highly skilled artisans about 8,800 hours to complete. This magnificent beauty contains 4,517 diamonds of which are 105 yellow, 56 pink and 4,365 colourless diamonds all giving a total weight of 381.92 karats.