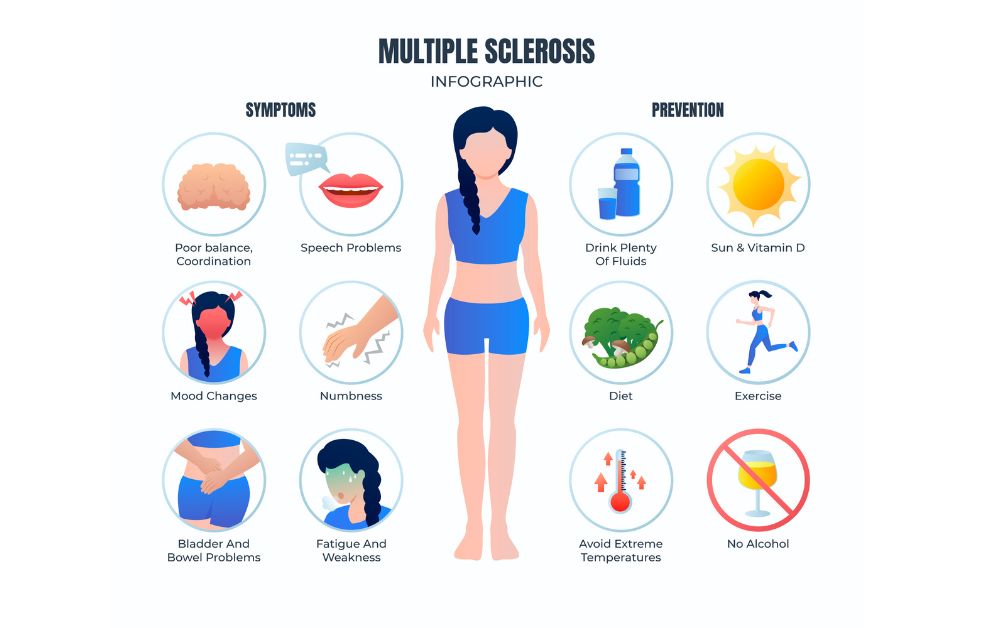 Multiple sclerosis is a chronic autoimmune disease that affects your brain, spinal cord, and optic nerves. according to statistics, Multiple Sclerosis affects over 2.3 million people worldwide, with around 400,000 of those people living in the U.S. Multiple sclerosis can develop at any age, but it most commonly starts between the ages of 20 and 50. Being able to recognize multiple sclerosis early on is very important because being diagnosed in its beginning stages increases the chances of slowing the progression of the disease.

Multiple Sclerosis is a disorder that affects the central nervous system. It disrupts the communication between your brain and spinal cord by damaging myelin, which is a layer of cells that surround your nerves. According to the National Multiple Sclerosis Society, Multiple sclerosis affects the myelin sheath which allows for messages to be sent between your brain and body. The destruction of this natural insulation causes disruption in communication within the central nervous system.

Multiple sclerosis causes fatigue in the early stages, but it is often one of the most noticeable signs because sufferers can’t even get out of bed. It’s not like normal tiredness when you don’t feel like doing something; MS fatigue is much more severe and makes you want to sleep all day long.

Bladder problems are an early sign of Multiple Sclerosis, which can also cause urinary incontinence. It makes it difficult for people with MS to find the time to go to the bathroom. Often times bladder issues are coupled with sudden urges to urinate without warning, but this isn’t always the case.

MS can cause muscle weakness in the early stages, especially when walking or navigating stairs. This is usually because of poor balance, which may lead to falling down.

Vision problems are another early sign of Multiple Sclerosis, particularly blurriness and double vision. The most common type of MS symptom that causes eyesight issues is optic neuritis which is when one of your optic nerves becomes inflamed.

5. Numbness and tingling in the body

Numbness or a feeling of pins and needles in hands is a common early sign of MS. It may be felt in the arms, legs, feet or even face which is why multiple sclerosis is also known as a disease of the face.

Some medical professionals contend that multiple sclerosis is an autoimmune disease that is triggered when the body’s immune system attacks healthy tissue in the central nervous system. This theory proposes that our bodies naturally produce antibodies to fight pathogens, but sometimes these antibodies spark a response against myelin, which can lead to inflammation of the membranes surrounding nerve cells. Many of us naturally produce Autoantibodies, which is why the production of antibodies may not be the only cause.

Scientists believe that Environmental factors can play a role in Multiple Sclerosis. Exposures to toxins or certain infections may trigger an immune system response against myelin for example, but there are many other things that can lead to this attack. The most common theory is that there is a virus or other foreign invaders that cause the immune system to produce these auto-antibodies.

How to deal with Multiple Sclerosis.

In the early stages, no treatment is required to help control MS. In fact, it may not even be diagnosed yet. However, there are a few things you can do to get the symptoms under control.

1. Try to maintain a healthy weight.

This will help decrease inflammation of the nerve sheaths and hopefully prevent new neurological symptoms from happening.

2. Try anti-depressants or other medications that can help with stress-related fatigue.

Fatigue is one of the most common early signs. Stress can also play a role in MS, so anything you can do to lower stress levels may help with fatigue.

Regular exercise is important for reducing MS-related fatigue, so try to find an activity you enjoy, such as walking, biking or swimming.

MS can be a debilitating disease in the early stages, but it doesn’t have to prevent you from doing anything and everything that’s important to you. For many people, the symptoms go away just as quickly as they came on leaving no traces of damage behind. However, for others, MS does get worse and causes more damage to your body.

Anxiety and stress may contribute to MS-related fatigue, so try different relaxation techniques or attend therapy sessions in order to help control your emotions and make the most of the time you have left with Multiple Sclerosis.